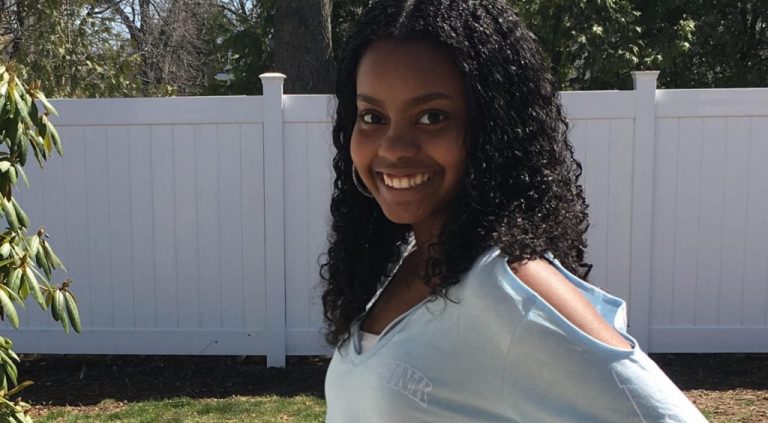 “I raise up my voice—not so I can shout, but so that those without a voice can be heard…we cannot succeed when half of us are held back.” ―Malala Yousafzai. Malala is an advocate for women empowerment across the world. Through the defiance of fear, Malala stood up for gender equality and equal rights to an education. Today we share a story of another girl who, like Malala, are speaking up about gender equality and demanding change.

Kayla Cato of Braintree, MA just turned fourteen and is about to finish her last year of middle school. She has believed in equal opportunities for men and women since she was six years old—when she realized how society tried to force her into stereotypes. All too often she heard things like “boys are better at math and science; girls are should focus on art”. Not to be deterred by these antiquated ideas Kayla followed her passion for STEM and excelled in both math and science. She became a member of the Russian School of Mathematics in Milton, MA and was also selected to participate in a computer programming class for girls called CodeIt at the Massachusetts Institute of Technology (MIT) in the spring of 2017.

But Kayla knew she could do more to help other girls just like her, who wanted to crush stereotypes and pursue their passions. Then, it dawned on her—with her birthday coming up, she would forgo traditional gifts and encourage her friends and family to donate to Strong Women, Strong Girls (SWSG) instead. Kayla turned her birthday party into a fundraiser with her family and friends. During the fundraiser, Kayla gave a speech about the importance of self-confidence and not allowing negative thoughts or environments, to determine the great potential that every human being carries inside of them, despite of their gender.

Kayla was joined by fellow advocate Marynee Pontes, a former SWSG participant and mentor. Marynee shared how SWSG supported her throughout her academic career and taught her important skills like self-confidence and perseverance. The evening ended with a musical performance by Lindsay Straw, who performs traditional English and Irish music. In support of the Girl Empowerment event, Lindsay’s song selection included a variety of songs in which women heroes were outlined, which is not typical in her genre of specialization. However, Lindsay Straw is also a strong advocate for Women Empowerment and even donated her time and performance to Kayla’s fundraiser for Strong Women Strong Girls, traveling all the way from Salem, MA to Hingham, MA, where the fundraiser was held.

Together, Kayla and her network for strong girls (and women!) were able to raise $500 in support of SWSG’s mentoring program. As Kayla outlined in her speech, having high self-confidence and not allowing the fear of failure to control your life, will allow people to achieve their full potential. Whether you are a boy or a girl, a man or a woman, all genders should have equal opportunities and the ability to achieve their unlimited potential! You can join Kayla in her efforts by donating to SWSG today.