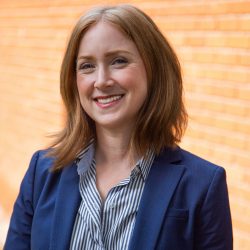 Dr. Jocelyn Horner is the Co-President and Executive Director of Strong Women, Strong Girls Pittsburgh. She joined the organization in the summer of 2017 and has since been working to bring strong mentoring relationships to more girls and women in the city.

Prior to joining Strong Women, Strong Girls, Dr. Horner received her doctorate from Tulane University’s interdisciplinary City, Culture and Community program, with a concentration in Social Work. Her research examined innovative strategies for promoting social-emotional wellness among adolescent women exposed to risk or trauma. While pursuing her doctorate, Dr. Horner also founded HerStory NOLA, a mentorship project that leveraged college women as mentors to teach the art and skill of digital storytelling to young women and girls in New Orleans’ schools and youth centers.

In 2019, Jocelyn was named a Woman of Influence by the Pittsburgh Business Times and was honored at the Smart Business Magazine Smart 50 Awards as a Top Executive and specially in the Impact category for her work with SWSG. In 2014, she was a recipient of Tulane University’s Changemaker Catalyst award as well as a NewDay Challenge grant for her work with HerStory. Dr. Horner has also presented nationally and internationally at academic conferences on HerStory’s unique model of youth development. She received her Masters of Science in Urban Geography from the London School of Economics in 2007, and her Bachelor of Arts in Sociology and Urban Studies from the University of Pittsburgh in 2005. She was a 2004 National Truman Scholar.

Dr. Horner has also served as the lead staff member for the Children’s Museum of Pittsburgh’s Charm Bracelet Project and the Director of Operations for Carnegie Mellon University’s Hear Me initiative. In addition, she has worked directly with diverse groups of women, girls, and children as a career mentor, volunteer coach, teacher, and Big Sister. A proud native of Pittsburgh’s Northside, she spends her free time running on the city’s river trails, teaching yoga, watching Steelers games, and cooking vegetarian food for her friends and family.