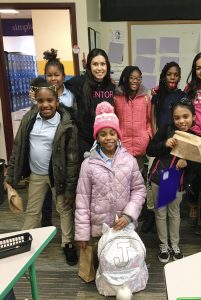 Strong Women, Strong Girls Pittsburgh is proud to announce our first-ever SWSG Mentor Scholarship recipients! Each of our spring 2019 winners was chosen for her exceptional dedication to SWSG, academic excellence, and a commitment to mentorship and community.

Sandra felt connected with Strong Women, Strong Girls from her first contact with the group at the University of Pittsburgh activity fair her freshman year. She’s always been passionate about working with children in her hometown of Summit, N.J., and she wanted the chance to make an impact in Pittsburgh. Now, SWSG is a central part of her life that she’ll carry far into the future.
“SWSG has brought new light to my life and a new sense of purpose,” said Sandra. “This organization enables me to engage in the surrounding community and brings joy to my heart for being a part of these girls’ lives.
Sandra majors in Psychology with a minor in Social Work and hopes to become a Clinical Psychologist. She’ll apply her social work background by working toward social changes throughout her life and advocating for policy change in society. In all of her work, Sandra believes she’ll apply the tools she’s gathered through SWSG by promoting values of strength and capability in women.

A Morgantown, W.V., native, Maggie has always been passionate about community service. She joined Strong Women, Strong Girls at Duquesne University after learning about the organization at an activity fair, where she fell in love with the concept of a community of women and girls that all build each other up. She mentors and serves as Site Leader at SWSG’s Sto-Rox Elementary site and realizes the impact she has on her girls is matched by the impact they leave on her.
“SWSG is so much more than showing up at a school once a week to teach a lesson,” said Maggie. “In SWSG, we build meaningful relationships with each other and the girls we serve.”
Maggie is a Speech-Language Pathology Major with a minor in Spanish and plans to graduate with a master’s degree in Speech-Language Pathology in 2021. Her goal is to work in speech therapy for children who speak English and Spanish, and she hopes she can infuse her work with the ideals of empowerment, inclusion, and justice that SWSG has taught her. She also hopes to serve as a professional woman mentor for a college student in the future!

Julia Ryhal, Robert Morris University
New Castle, Pa., native Julia has been heavily involved in Strong Women, Strong Girls since early in her RMU career when she met the existing RMU SWSG chapter members and immediately felt connected. Through SWSG and her current job at Kindercare Learning Center, she’s uncovered a love of working with children and helping them realize their capabilities.
“I truly believe in the core purposes of [SWSG], and that is to empower women of all ages,” said Julia. “My favorite part of being in SWSG is seeing the growth in the girls I mentor.”
With a major in Psychology and a minor in Criminal Justice, Julia hopes to go on to earn a master’s degree in psychology and possibly become a criminal psychologist. She plans to carry the lessons of SWSG wherever she goes, including the traits and strengths she’s discovered in herself. Julia credits the RMU SWSG chapter for making the experience so worthwhile, fulfilling, and, ultimately, life-changing.

Now in her seventh semester with Strong Women, Strong Girls, Brianna chose SWSG at the advice of a former SWSG mentor. She’s always loved working with children and seeing the world from their perspective. Through her role as a mentor, Brianna has solidified her dream of working with children later in her life.
“I believe the girls are a breath of fresh air from the harsh reality of the outside world, and I want to continue to encourage them to hold onto their imagination for as long as possible,” said Brianna.
After graduation, the Psychology major plans to become a child psychologist and a community engagement professor, applying her minors in Women’s and Gender Studies and African Studies. She’ll continue to uplift girls and women throughout her life and live by this quote from Nelson Mandela: “It always seems impossible until it’s done.”